Forecast 2021: Is Bitcoin Worth Investing In?


Is it the "gold of the XXI century" or a soap bubble about to burst? We have repeatedly discussed the advantages and disadvantages of bitcoin over the past year,  and analyzed the reasons for its ups and downs. Therefore, we decided to cite only the opinions of experts regarding the prospects for the main cryptocurrency in this review.

You may decide to be patient and invest in bitcoin for a long-term profitability. Or, on the contrary, you do not want to take risks and prefer to forget this word altogether. In general, the decision to buy, sell bitcoin or simply do nothing is always yours. 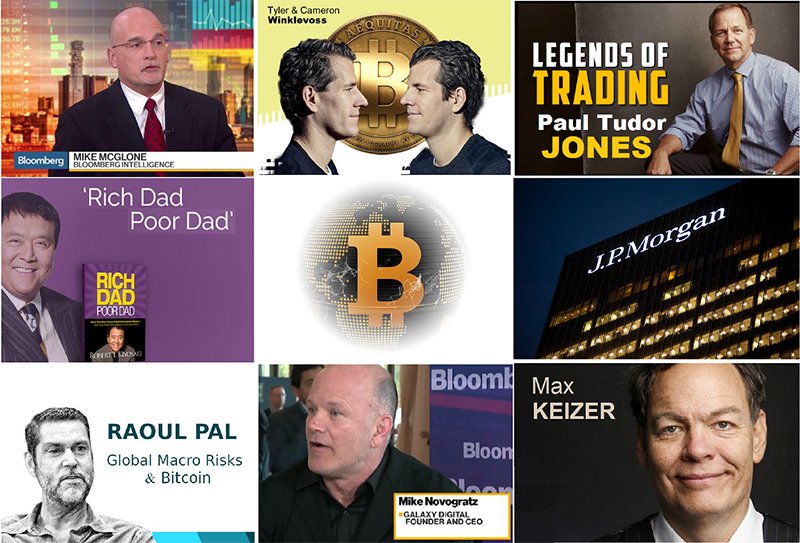 Optimists' predictions: Only to the North!

1. Bestselling author of Rich Dad Poor Dad and entrepreneur Robert Kiyosaki is convinced that cryptocurrency will continue to rise to $50,000 next year amid further influx of institutional money. The entrepreneur, having said that “America is in trouble”, precludes the “death” of the US dollar and a “bright future” for gold, silver, bitcoin.

“Bitcoin's rise has outpaced gold and silver,” he wrote. - What does it mean? This means that you need to buy as much bitcoin and precious metal as you can and don't put it off. The train is already leaving. The dollar is dying. When the dollar falls, the price doesn't matter anymore. What matters is how much gold, silver and bitcoins you have.”

2. According to analysts at the JPMorgan Chase banking holding, bitcoin outperforms gold as an alternative currency and has a significantly better chance of continued growth. According to their report, the capitalization of the crypto market is not large enough yet. JPMorgan estimates that the physical gold market, including ETF backed by it, is $2.6 trillion. Bitcoin needs to hit the $130,000 mark to catch up with the precious metal in this respect.

According to JPMorgan Chase, institutional investors can invest up to $600 billion in the first cryptocurrency in the coming years. This requires American, European and Japanese insurance companies and pension funds to invest only 1% of their assets in bitcoin. However, at the moment there are still regulatory requirements for the selection of investment assets in terms of risks and performance of obligations for such traditional investors. This can limit the amount of funds available for buying BTC.

3. The well-known Dutch cryptanalyst PlanB, who developed the popular BTC stock-to-flow valuation model, believes that the price of the reference cryptocurrency may rise to $100,000 by the end of 2021, and maybe up to $300,000. PlanB admits his forecast sounds extremely optimistic. However, the rise in the price of bitcoin in the past allows him to make such predictions.

The expert notes that during periods of market corrections, the algorithms of bitcoin whales pick up hundreds of portions of 0.01 BTC from "weak hands". Later these coins “disappear” in “deep” cold vaults. This leads to a supply shock and triggers a bull market.

4. Scott Minerd, investment director of Guggenheim Investments, considers bitcoin to be a grossly undervalued asset, even at current price levels of around $23,000. “Our fundamental work shows that bitcoin should be worth about $400,000,” he said in a conversation with Bloomberg TV.

Analysts at Guggenheim Investments came to this conclusion based on two factors: the limited emission of bitcoin and its value relative to gold. There are many common characteristics that cryptocurrency shares with the precious metal, Minerd said, but bitcoin, unlike gold, "has extraordinary value in the context of transactions."

5. Popular analyst and founder of Quantum Economics Mati Greenspan believes that “we are at the very beginning of a period of mass investor entry into the cryptosphere. If demand continues to rise and supply is constrained, then there is a possibility that we will see growth of 250% or more." At the same time, Mati Greenspan excludes a scenario in which BTC will soar to $400,000. “The rally will certainly continue, but there is no need to talk about any astronomical figures yet,” the analyst sums up. He believes that, unlike in 2017, the market is now controlled not by speculators but by corporations and large investors interested in its stability. The entry of these large players leads to the fact that volatility will weaken, and this area will become more attractive.

6. Bloomberg experts believe that there is no reason for a change in the direction of bitcoin's movement now, and its cost may increase to $50,000 in 2021.  “The dollar is gradually losing its position, ducking other fiat currencies,” writes this authoritative agency, “All this is noticed by investors who are forced to switch to alternative assets.” Bitcoin has significantly more support now, which minimizes the likelihood of a pullback. Open interest in the CME bitcoin futures market has exceeded $1 billion for the first time in history, which also speaks of growing support from investors.

Looking into the longer term, Bloomberg analyst Mike McGlone has suggested that within 5 years the price of the main cryptocurrency could exceed $100,000.

7. A similar point of view is followed by the American billionaire Paul Tudor Jones, head of Tudor Investment Corporation, who said that “cryptocurrencies are facing a crazy flight on a rocket with ascents and descents along the way.” “In 20 years, bitcoin will be significantly higher than the point where it is now. From here, the road for it lies north,” Yahoo! Finance quoted him.

8. The report of the fintech company Cindicator is of great interest. This is due to the fact that the figures presented in it are not the opinion of individual specialists, but the average results of the survey of more than 156,000 participants of the crypto market, according to which bitcoin next year will rise to $29,569. The respondents with the most accurate forecasts, the so-called "superforcasters", expect even greater growth on average, to $32,056.

According to the calculations of the “Hybrid Intelligence” Cindicator, which uses machine learning algorithms to process data from a team of analysts, the BTC rate next year will not exceed $25,222.

9. According to Mike Novogratz, head of the Galaxy Digital crypto trading bank, everyone should invest 2-3% of their funds in bitcoin. “After that, it is enough to wait a little time, and you will be surprised, but cryptocurrencies will cost significantly more. If you wait for five years, the assets will multiply several times,” he wrote.

11. The Director General of Global Macro Investor Raoul Pal expects that even conservative institutional investors, who usually prefer precious metals, will start investing in bitcoin next year. Therefore, Pal made a bold assumption that the rate of the first cryptocurrency could reach $250,000 in a year and placed an order for the sale of all the gold he had in order to invest in BTC and ETH in the ratio 80 to 20.

12. Even more inspiring forecast was given by Gemini crypto exchange founder Tyler Winklevoss, one of the twin brothers who are called the first cryptocurrency billionaires. He said on CNBC that the value of bitcoin could exceed the $500,000 mark.

"The question isn't whether bitcoin will cost $500,000 or not, the question is how quickly it will happen. In fact, even this assessment seems to me very conservative - the game has not really even started," said Tyler's brother Cameron Winklevoss.

13. A similar figure is also called by a member of the Board of Directors of the Bitcoin Foundation Bobby Lee, according to whom the price of the main coin can reach $500,000 by the year 2028.

14. According to experts from one of the shareholders of Tesla, the ARK Invest fund, the capitalization of bitcoin may exceed $5 trillion. This will take the coin up to 10 years, but massive investments can start earlier. This figure could reach $1 trillion in the next 5 years, after which growth will occur at a faster rate.

15. A forecast was presented by Tom Fitzpatrick, Managing Director of one of the largest banks in the world, Citibank. According to him, thanks to consolidation in the status of digital gold, the rate of the first cryptocurrency can reach $318,000 by the end of 2021.

In his new report, Bitcoin: Gold for the 21st Century, Fitzpatrick writes: "Bitcoin moved in the aftermath of the Great Financial Crisis of 2008, when new changes in the monetary regime took place and we dropped to zero interest rates." And further he concludes that currently, financial stimulus measures against the background of the coronavirus pandemic have led to the formation of conditions similar to the 1970s, when the dollar inflation led to the increased demand for gold.

16. Popular TV presenter and Wall-Street veteran Max Kaiser believes that at current levels, bitcoin futures traders are suppressing the price of BTC to give institutional players a chance to "load the boat." However, once the asset reaches the $28,000 mark (the intermediate benchmark set by Kaiser), the number of coins for sale will go zero, and thanks to the deficit, their price will burst up to the cosmic heights.

“For the poor of this world, the current price and availability of BTC,” says Kaiser, “is the only opportunity in life to purchase non-forfeitable hard money before the price of it rises to 40-80 times, and prices will soar to the level of golden parity at around $400,000.”

“The demand for bitcoin is growing almost exponentially,” he says, “while its supply is mathematically fixed at 900 coins per day. And in 2024, the supply will be halved to 450 BTC per day. That's why I think people simply won't have the opportunity to buy coins, since the price can soar even to $1,000,000 per BTC. Meanwhile, Gen Z, who bought a lot of bitcoins when they were under $100, will become the new global power elite. The world order is about to change...”

Pessimists' Predictions: A Fly in the Ointment

1. Despite the optimism in general, Galaxy Digital CEO Mike Novogratz believes that bitcoin instability can be expected in the near future. Its price in 2021 will certainly not return to zero, but could fall to the $14,000mark, or even $12,000. Although a correction to such levels is unlikely, investors need to be prepared for losses of 30-40%.

2. According to the average forecast of fintech company Cindicator, the lower bar of the trading range for the BTC/USD pair in 2021 will be at the level of $15,000. “Superforcasters” are less optimistic and expect a decrease to $12,000, and according to the calculations of “Hybrid Intelligence” Cindicator, the bitcoin rate will not go down next year below $16,000.

3. Matt Maley, strategist at financial services firm Miller Tabak, believes the cryptocurrency market will face a major setback next year. According to him, the main coin may fall in price by about 25-30 percent in the first months of 2021. According to Maley, the market is overheated due to large-scale investments, which is why corrections by one or several thousand dollars may become a norm.

“I consider cryptocurrencies to be a promising asset, but the minimum correction size next year will be 10%. At the same time, the fall may be at the level of 30% or even more. Therefore, it is worth being prudent before large-scale investments,” the specialist warns.